Delicious French Toast made on your grill! This Blueberry French Toast is grilled so you don’t have to heat up your kitchen and can make it while camping over a campfire too! The hint of cinnamon and juicy blueberries and crunchy pecans will make this your new favorite french toast recipe! 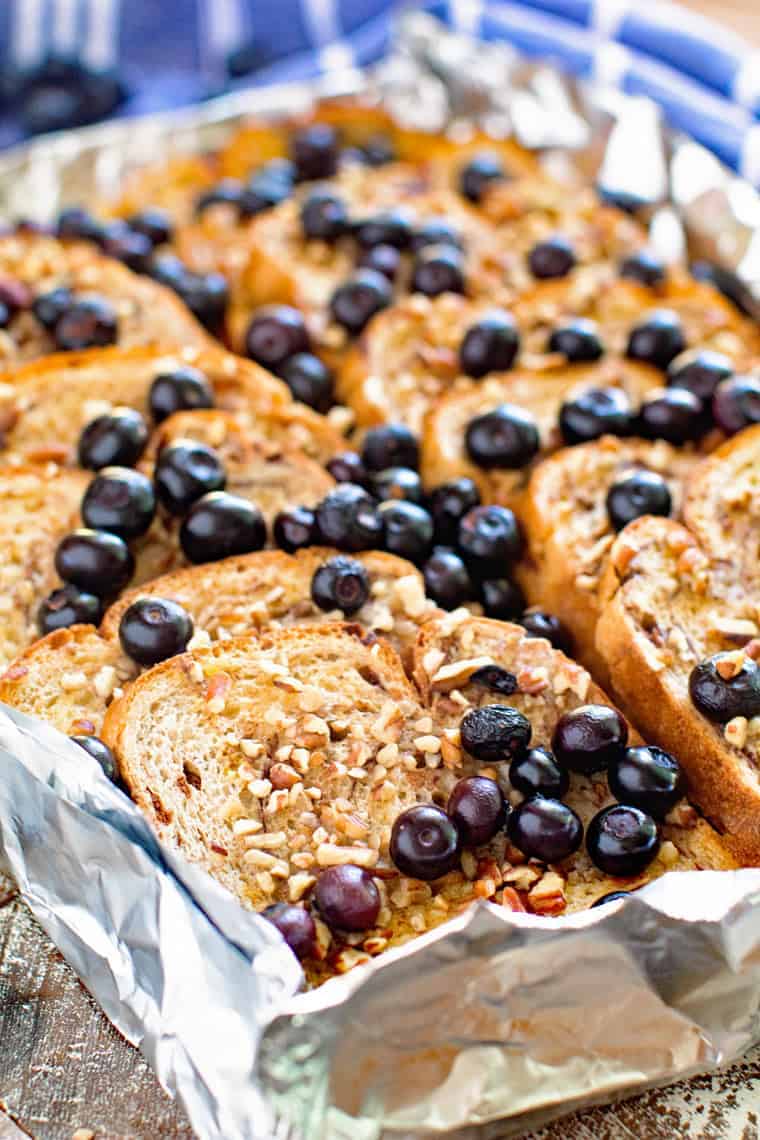 Imagine french toast, bursting with plump, juicy blueberries and crunchy pecans. Now, imagine doing this while camping! It’s so easy to make and such a fun breakfast that can be made on the grill or campfire. Mix up your camping breakfast with this Blueberry French Toast recipe now!

Have you been camping yet this summer? The kids love it! I love it too, but you know what I don’t like… cleaning up a bunch of pans when breakfast, lunch and dinner is over! It’s like my job is never done! Story of a Mom’s life, right? I feel like I’m stationed in the kitchen over the sink half of the day. I’m one of those weird people that HAS to do dishes after every meal. I hate going to bed with the dishes dirty. Are you like that?

Here’s my easy fool-proof method of making the BEST Blueberry French Toast right on the grill! It’s easy to make using indirect heat and so delicious!

Let’s face it, juicy blueberries and crunchy pecans with just a hint of cinnamon? Mmmmm!!!! Everything tastes better on the grill, don’t you agree?

This would even be fun to make when the kids are having a sleepover! On the grill, campfire or in the oven French Toast is always a family favorite! My oldest daughter was begging for this the next morning after we made it. Apparently she has a love of French Toast I never knew about! Trust me, I’m just fine with this! 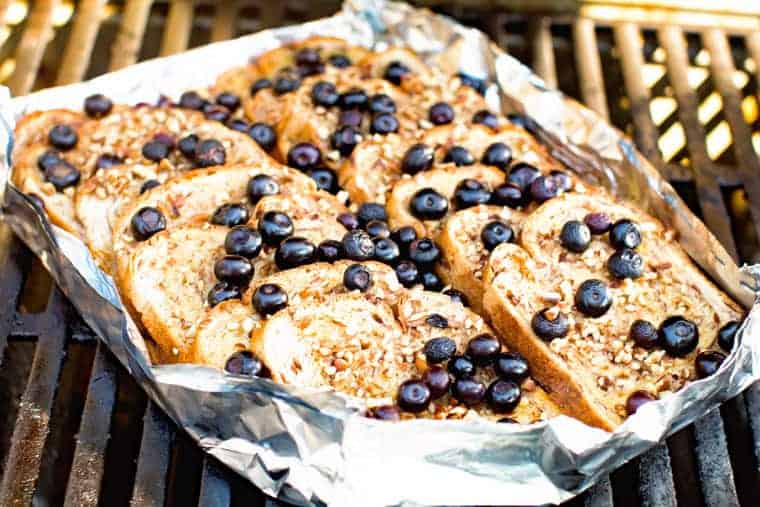 What is Indirect Heat?

Here are more great options to serve with this meal!

Your kids (big and small!) will love this meal – you will too and cleanup is a snap! I know it’s going to be your new favorite French Toast Recipe! So be sure to give this one a try, don’t forget to share a picture with #gimmesomegrilling or on Instagram at @gimmesomegrilling!

If you have a moment, be sure to leave a five star rating below, I’d really appreciate it! 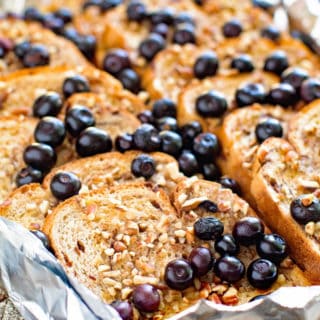 Julie Evink
Delicious French Toast made on your grill! This Blueberry French Toast is grilled so you don't have to heat up your kitchen and can make it while camping over a campfire too! The hint of cinnamon and juicy blueberries will make this your new favorite french toast recipe!
5 from 1 vote
Print Recipe Pin Recipe
Prep Time 15 mins
Cook Time 30 mins
Total Time 45 mins
Course Breakfast
Cuisine American
Servings 6
Calories 499 kcal

This can also be made in the stove. Preheat oven to 350 degrees. Place foil packet on a large baking sheet and baked for about 30 minutes or until heated through and eggs are "set". Let stand 10 minutes and sprinkle with remaining blueberries. Serve with syrup.

Slightly Adapted from: Taste of Home

Hi! I'm Julie and I'm so happy you are here! We are focusing on easy, simple recipes that everyone can tackle on their smoker and grills that the entire family will enjoy! Our recipes are for the every day grill master! 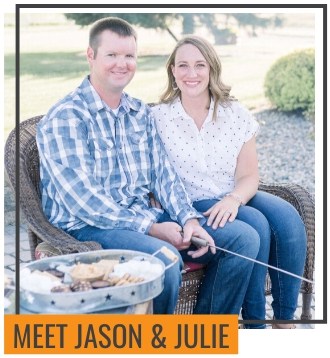 Hi! We are Jason & Julie we are focusing on easy, simple recipes that everyone can tackle on their smoker and grills that the entire family will enjoy! 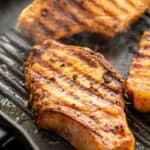 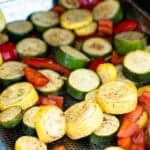 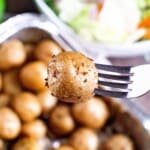 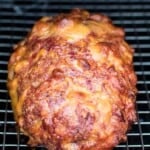 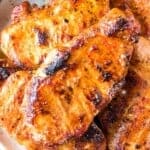 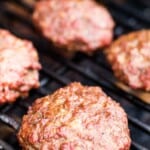 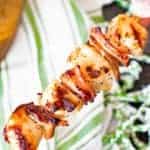 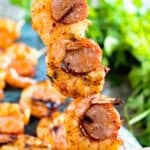 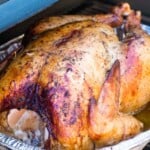 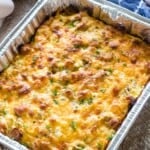 SUBSCRIBE TO THE NEWS
TO GET SMOKING HOT RECIPES DELIVERED TO YOUR INBOX! 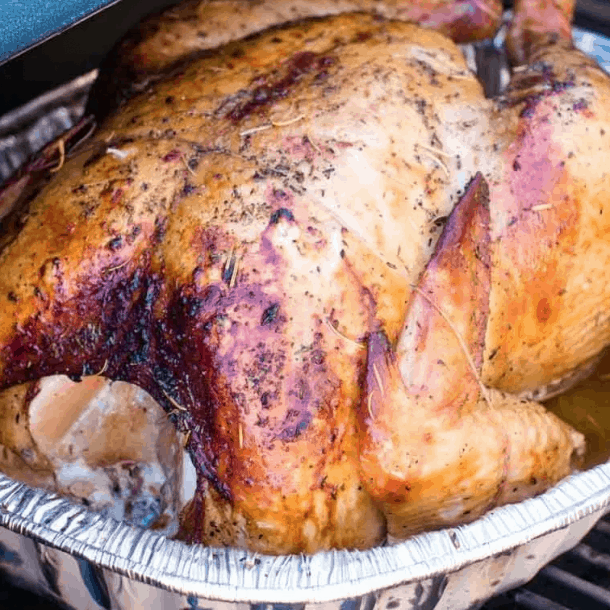 5 Secrets to Master Smoking your recipes including our favorite tools and easy recipes!

Success! Watch your inbox for your free guide.